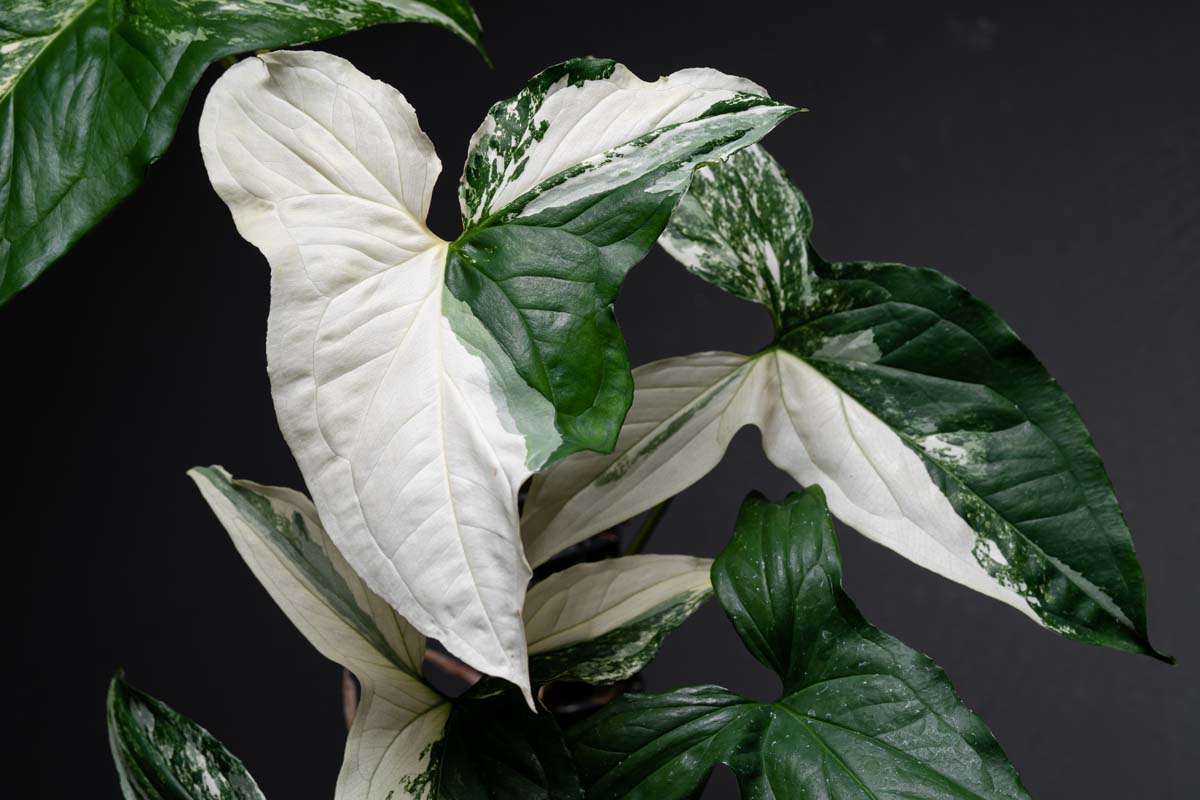 Variegation refers to a leaf and stem containing more than one colour. It is most commonly associated with plants whose normal foliage colour is green, while their variegated counterparts have areas of yellow or white. Technically, any plant which displays multiple foliage colours is variegated. The word ‘variegated’ comes from the Latin word variegatus, which means made of various sorts of colours.

The yellow/white commonly seen on ‘variegated‘ plants is actually due to a lack of chlorophyll (green pigment) in some of the plant cells. Chlorophyll is located within the chloroplast (a membrane-bound organelle known as a plastid) and helps the plant absorb light, carbon dioxide and water, and convert it to glucose and oxygen.

There has been a surge in interest in variegated plants over the past decade. Some are sold at garden centres for a few dollars. However, variegated specimens such as Rhaphidophora tetrasperma, Monstera deliciosa and Monstera adansonii sell for hundreds or thousands of dollars.

What causes variegation in leaves?

Variegation may occur due to a number of reasons. Some variegated plants are naturally occurring, and other causes include mutations and viral infections.

Most of us think of leaves as green, but many plant species have brightly-decorated leaves due to different types of pigment. Chlorophyll is the most abundant pigment in the plant kingdom. Carotenoids give plants yellow or yellow-orange hues, while anthocyanins are responsible for red or purple leaves.

This type of variegation is a genetic trait built into the plant’s DNA which programmes different cells to produce different colours and is passed down from generation to generation. There are a number of advantages to natural variegation, which may act as camouflage or a warning against vertebrate herbivores. Dracaena trifasciata syn. Sansevieria trifasciata (snake plant), Solenostemon scutellarioides syn. Plectranthus scutellarioides (coleus), Calathea spp. and Caladium spp. are examples of plants with natural variegation.

Transposable elements (TEs) are DNA sequences also known as jumping genes that are able to change their position within the plant genome through a mechanism called transposition. They were discovered in 1948 by Barbara McClintock in 1948 while working with Indian corn, for which she was later awarded a Nobel Prize. Interestingly, approximately half the human genome is made up of TEs. We still don’t know the entire impact of these movable DNA sequences, but they can play a role in some diseases and cancers.

TEs can cause changes in gene function and composition, including genetic reprogramming and the creation of novel functional proteins. If the TE inserts into a gene for chloroplast development or chlorophyll production, the resulting tissue will be white.

The most common cause of variegation is a genetic mutation in the meristem. This mutation results in a plant with two genotypes, one of which can produce chlorophyll, while the other cell line is unable to. The meristem is a type of tissue made up of undifferentiated cells that differentiate to form tissues of the plant.

There are three types of chimera variegation: mericlinal, periclinal, and sectorial.

The outer layer of the non-pigmented epidermis lifts from the pigmented layer below causing an air pocket to form. This creates a transparent patch that reflects light on the leaf surface, giving the leaf a shimmery silver look.

Viruses are microscopic infectious entities made up of DNA or RNA and surrounded by a protein coat. They are unable to replicate on their own, instead, they use the cellular machinery inside their host to replicate.

There are over 2000 known viruses that affect plants a host of edible and ornamental plants with an enormous economic impact on the horticulture industry (farmers, garden centres etc) and related business. Mosaic viruses spread from plant to plant via insect vectors (mosquitoes, beetles, thrips), nematodes, fungi, propagation, fomites (inanimate objects such as secateurs) and contact between plants. It can take less than one minute for a plant-feeding insect to acquire the virus.

Infected plants can display a range of clinical signs including stunted growth, leaf curling, green and yellow mottled or marbled pattern on the foliage which gives a variegated appearance. One of the most well-known mosaic viruses in the flower world is the tulip-breaking virus (also known as the tulip mosaic virus). TBV leaves an attractive striped pattern on the flowers and was responsible for ‘tulipomania‘ in the seventeenth century and striped tulips were highly sought after. Unfortunately, TBV also weakens the plant and the striped tulip almost died out, with only a small number of varieties remaining. However, due to the devastation the virus causes to commercial tulip crops, it is illegal to grow TBV-infected plants without a license.

There is no cure for mosaic virus and affected plants should be destroyed. This is one case where variegation is not a good thing.

Caring for a variegated plant

Because variegated plants have less chlorophyll in their leaves, they are slower growing. For this reason, variegated plants need more light to enable them to photosynthesise effectively. Having said that, more light can also burn leaves, so it can be a bit of a balancing act. If natural light is an issue, invest in a good-quality grow lamp.

I like to let new plants settle in for a week or two before I repot them. Always select a premium potting mix, and use an appropriate-sized pot for the plant. A tiny plant with a 2.5 cm root ball does not need to go into a 30 cm pot, but a plant with a 30 cm root ball should be given a pot large enough for it to grow into.

Feed the plant with good-quality fertiliser during the active growing season. You may also choose to supplement these feedings with a plant tonic (I use Powerfeed by Seasol) which can improve soil structure, promote growth and enhance colour.

The following examples are words most commonly used to describe yellow, cream or white variegation and not the colourful variegation on plants such as coleus. These terms can help plant collectors understand exactly what they’re getting.

Half-moon: The leaf or leaves are made up of half white and half green

High variegation: The leaf or leaves contain a large amount of white or cream variegation

Low variegation: The leaf or leaves contain a small amount of white or cream variegation

Blocky: When a variegated plant has a block of white (or yellow) on the leaf, this solid pattern is highly sought after

Marbled: Evenly-distributed patches of white or yellow and green across the leaves

Sectoral: A part of the leaf has a solid white, cream or yellow variegation

What should I do if a leaf on a variegated plant grows out all green?

Sometimes a new leaf will grow out green, this is known as reverting. To prevent the entire plant from reverting back to green, snip off the new all-green leaf.

What should I do if a leaf on a variegated plant grows out all white or yellow?

While an all-white or yellow plant is dazzling, its lack of chlorophyll means it won’t survive. Plant enthusiasts refer to these leaves as ‘suicide leaves’. They may look stunning, but won’t last very long. Take some photos, share them on social media, and then cut the leaf off.

Why are variegated plants so rare?

Not all variegated plants are rare (or expensive). Variegated Schefflera arboricola (umbrella tree) and Hedera helix ‘Variegata’ (English ivy) and Ficus pumila variegated (creeping fig) are common varieties of variegated plants that sell for only a few dollars. Our local Aldi is currently selling Ficus elastica ‘tineke’ for $10.00.

The price is determined by the availability of the plant. As the number of available variegated Monstera deliciosa spp., has increased, the price has slowly started to drop.  However, plant collectors can still expect to pay several hundred for a small specimen.

The most expensive variegated plant I have seen on the market was a Philodendron ilsemanii variegata, with a price tag of $14,000 AUD and in June 2021. A R. tetrasperma (mini monstera) sold for over $20,000. This shows just how much collectors are willing to pay for a rare variegated specimen.

Why are variegated plants so expensive?

Most variegated plants can only be propagated from stem cuttings, leaf or seeds will not be true to type (ie; variegated). All commercially sold Monstera deliciosa ‘Thai Constellation’ come from tissue culture from a single laboratory in Thailand. With only one global supplier and high demand, this makes for an expensive plant.

Plant collectors do make their own cuttings from variegated plants, often to raise funds to add new plants to their collection. Cuttings may be rooted or freshly cut. Inexperienced plant collectors should always purchase rooted and established plants.

Why do some variegated plants revert?

Naturally variegated plants such as coleus won’t revert, because the colour/pattern is written into the plant DNA. Chimeric plants can and do revert, especially unstable mericlinal and sectorial variegated plants. Aside from natural variegation, most variegated plants can potentially revert back to all green. There are several causes of this, including extreme heat or cold, as well as low light levels where the plant’s natural survival mechanism kicks in and reverts back to its original state (all green).

Where can I buy a variegated plant?

The Internet has made sourcing rare and unusual plants considerably easier for collectors, but it is not without its risks. The popularity of rare plants, and the high price tag can, unfortunately, attract scammers.