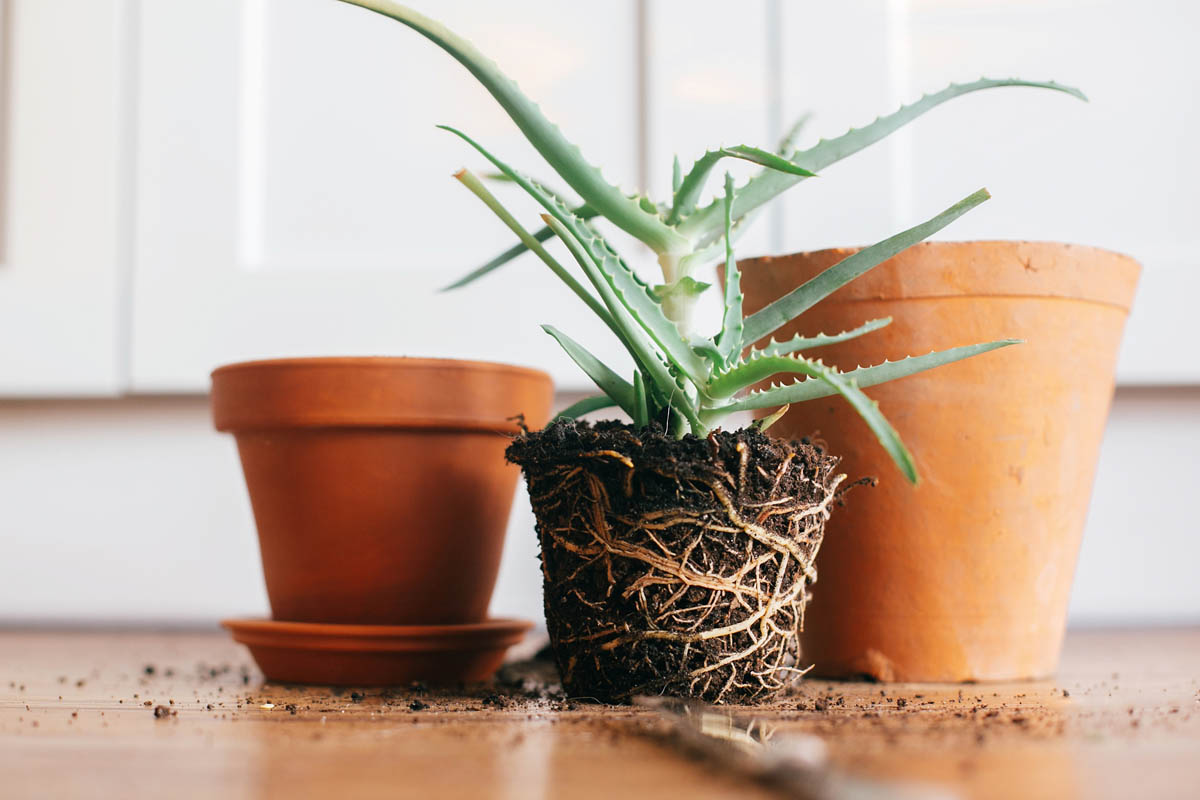 As the plant grows, the root system develops and eventually the plant runs out of space and will need to move to a larger pot. If you’ve ever seen a severely potbound plant, you will have noticed the roots have curled around the base of the pot and there’s very little dirt left. Leaving a plant in a pot it has outgrown will result in a stunted plant.

At this point, it will be necessary to repot into a larger pot. This is known as ‘potting up‘ and involves teasing the potbound plant out of its pot, loosening the roots, and placing it in a larger pot with fresh soil. The next pot should be 2.5 – 5 cm (1 – 2 inches) larger than the current pot, ie; if the plant is in a 20 cm pot, repot into a 30 cm pot. Potting up provides space for the roots to grow, and provides fresh soil (and nutrients) for the plant.

It can be tempting to go for an even larger pot to allow the plant to grow into it and avoid the need to repot for some time. But, there are risks to overpotting plants.

Signs a plant has been overpotted

I purchased a plant a few months ago and put it into a large pot, what made it worse was it had no drainage hole (as it was indoors I thought this would be a good thing). Every time I watered my plants, I included the new addition. It came with a new node, which eventually started to turn brown. All of my other plants continued to grow, but the new addition did nothing. I decided to check the roots to see what was going on beneath the soil. When I pulled the plant out of its pot, the soil was absolutely saturated, despite the top layer of soil appearing to be the same as that of the other plants, moist but not saturated. This saturated soil was clinging to the roots.

Thankfully, this was caught in time. I washed the roots in lukewarm water and allowed them to dry completely. The plant was then relocated to a much smaller pot.

Remove the plant from the large pot and relocate it to a smaller pot with fresh plant-appropriate potting mix. As a rule, the new pot should be 2.5 – 5 cm (1 – 2 inches) larger than the previous pot or slightly larger than the plant’s rootball.

It is possible to keep a plant in an oversized pot, but you must take extreme care to not overwater it. Don’t rely on the old method of sticking a finger in the top 2.5 cm (1 inch) of soil. Ensure that the pot has drainage holes to allow excess water to escape. A soil moisture sensor is also a good investment.

Always use the right soil type for your plant (ie; succulent, premium potting mix etc), choose a porous clay pot with large drain holes, and be careful to not over or under water your plant.